This year, one of the Washington Children's Choice Picture Book Award nominees is called Lubna and Pebble by Wendy Meddour. Lubna and her father are refugees and when they arrive in the refugee camp, Lubna clings tightly to the pebble she found on the beach when they made it to their new, temporary home. Lubna paints a face on the pebble and it soon becomes her best friend. When she and her father are able to leave the camp and be resettled, she knows the right thing to do is to pass Pebble on to another little boy in the camp. As the story ends, the new owner of Pebble is happy to have a friend and we know he will take great care of it.

After the librarian, Ms. Rikard, read the story to the students, she told them of her idea for them to paint their own rocks, just like Lubna does in the story. When finished, students could keep their rock, give it to someone they care about, donate it to Garfield to be used outside in the landscaping, or to donate their rock to a real refugee child living in a camp. So, after securing a donation of rocks from Soracco Landscaping Materials, Ms. Rikard filled up two buckets, washed all the rocks and prepared to paint. Students took two weeks to finish their rocks and the end results are unique and inspired. Students learned a valuable lesson about how fortunate they are to have even the little things...like real friends to play with and a school and a playground...all the things Lubna did not have in the refugee camp. During this thankful season, they had a little time to reflect on their blessings and give back to someone else as well. 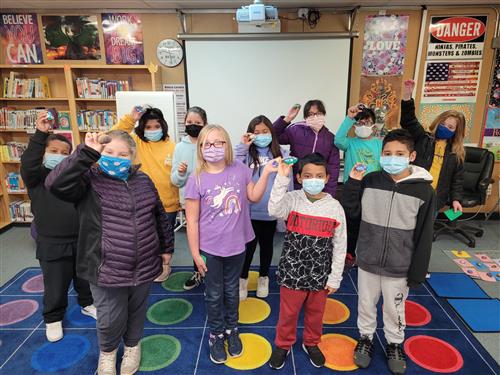