A.C. Davis Assistant Principal, Jewel Brumley, has worked part-time for the USDA agricultural lab outside of Wapato for 23 years. She is part of the chemical ecology group that studies lure and kill systems for pest insects like moths, beetles, wasps, yellowjackets, and hornets.

Most recently, Brumley has been using a lure made by the Wapato lab to capture murder hornets and trace them back to their nest. In the lab, she uses live murder hornets for pheromone work to make a lure that will bring them in great numbers. Working alongside Brumley is Jacqueline Serrano, the lead entomologist for the chemical ecology group. She is a great chemist and has done a lot of pheromone work with other insects.

In her position as the biological technician, she works on bio-assays (quantitative procedures used to determine the relationship between the amount of an insecticide administered and the magnitude of response in a living organism), conducts insect experiments, ID's target insects, cares for colonies of insects, completes data work, and shoots some photography.
"I love this position I got one summer 23 years ago as a teacher research associate. I stayed on and have worked with several insects; but wasps, yellowjackets, and hornets are my favorite. They are just incredible insects," said Brumley.
The science at the lab was an extension of her class when she was teaching. As a lifelong learner, it keeps her learning cutting edge science every year. "I have learned so much at the lab and have had several students get summer jobs here to help them decide if they want to go into scientific research as a career," added Brumley. 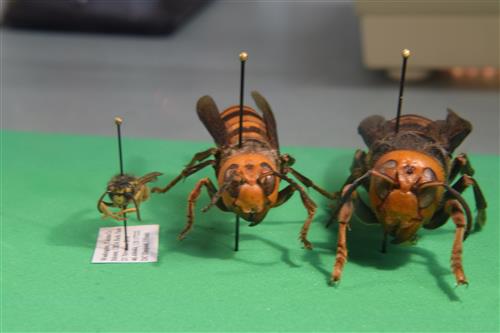